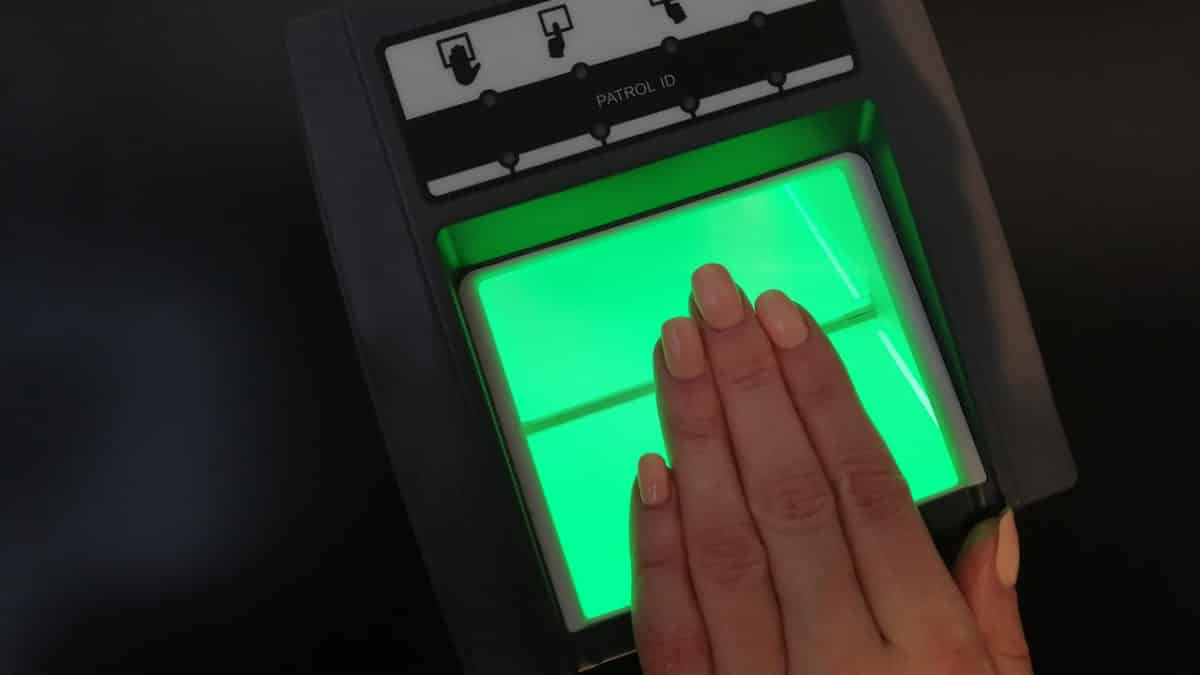 Security has been one of the main concerns since we integrated technology into our everyday lives. According to the business data platform Statista, the global biometric technologies market was worth 14.6 billion U.S. dollars in 2018. The market is expected to reach 55.42 billion U.S. dollars by 2027, following its rapid growth in the coming years and increase in use cases. Whether to protect sensitive data, to prevent fraudulent activities or to identify criminals, there is always demand for technologies that ensure safer ways of communication. Luckily, biometrics can offer all of that and their opportunities are limitless.

Biometrics are unique body characteristics that can be used to digitally authenticate an individual. These identifiers can be categorized as physical or behavioral traits. There are several options to choose from when looking to employ them, such as facial or iris recognition, palmprints, fingerprints and voice recognition being the most common examples. The type of biometric authentication used is determined by the goals of the entity deploying biometric validation technology. Needless to say, physiological traits are more stable since they are often non-alterable, except by severe injury or old age, when behavioral ones could be affected by illness or stress.

One of the most well-known identifiers, this type of biometrics has been in use since the late nineteenth century after Sir Francis Galton successfully convinced the general public of their reliability for identification. He was the one who provided the first functional fingerprint classification system which, after some adaptations, has been adopted by the police forces and used in documenting criminals. A fingerprint is a series of dark lines that indicate the upper part of friction ridge skin while the white spaces between them represent lower ones. It does have a set of unique characteristics – minutiae and singular points – that are extracted from a fingerprint image and used to recognize an individual. Using fingerprint biometrics is convenient, secure and if excessive wear isn’t a factor, as would be for someone working in manual labour, it can be used for a long time. Although, there is always the possibility of fingerprint forgery.

It is non-invasive and natural due to the fact that computer vision imitates a person’s behaviour. When we are trying to identify someone, we look at their face instead of, for example, their iris or gait. Face recognition technology works similarly. After capturing a face, the sensor applies an algorithm and converts it to digital data – then compares it to the ones held in the database and provides the user with the result. This image recognition method authenticates a person in a few milliseconds by using deep learning algorithms to analyze various facial features. Even though this type of biometrics is so popular due to its convenience and accessibility, to this day it does not provide 100% accuracy. Moreover, the algorithm could be fooled, for instance, by using a printed facial image.

This type of authentication is becoming considerably more relevant nowadays. Since everyone’s irises have unique patterns, it proves a stable and reliable method for identification compared to other biometric technologies. The process is divided into four stages: segmentation, normalization, feature extraction and matching. During the first stage the image is carefully placed so that inner and outer boundaries would create a circle which is then segmented. The second stage normalizes the iris region into a fixed rectangular box which allows comparison. During the third stage, all relevant information is extracted from a normalized image of the iris and encoded to generate a biometric template. The last phase is to measure the similarity between the input iris and the ones kept in the database. As long as the image of the iris provided is in good quality, quick and reliable identification can be executed.

Due to its superiority to other biometric technologies as the more accurate option, mainly used in law enforcement and homeland security, this identification method has gained in popularity as a study subject in the last decade. Palmprint’s complicated structure – ridges and palm lines –  makes it possible to give back clear outcomes. Its authentication process consists of five stages. After the palmprint image is acquired, preprocessing (image enhancement, filtering and other functionalities) is implemented. During the feature extraction stage all the minutiae details are taken out and sent to the database to initiate the matching process and provide the user with results. Since the surface area of a palm is larger than, for example, a finger tip, the identification process takes longer, however, as long as a good quality dataset is collected, it is one of the best choices for biometric technologies: it is non-invasive and provides very accurate results.

This behavioral trait used to authenticate a person grants required access quickly, effortlessly and securely. It works by creating a sample of a user’s speech, adding it to the dataset and matching it with inputs on demand, comparing voice qualities such as duration, intensity, dynamics and pitch. The method could be either text-dependent where the authentication requires a specific pre-recorded word or phrase to match it to the dataset, or text independently, which does not have such requirements. Voice recognition technology is very useful during a pandemic such as one we’re currently experiencing, since it offers a contactless way of identification, is cost-effective and widely accessible. However, it does not provide the most accurate results, is affected by background noise and requires a liveness detection to verify whether the input data is from a live person or a pre-recorded sample.

Overall, using biometric technologies for authentication is quicker, more convenient and secure than using ordinary methods. Users do not have to remember intricate passwords and since body characteristics are unique, it is harder to steal someone’s identity and commit fraud. However, it is not impossible. The results are only as good as the data collected, for example, it is much harder to identify a person using iris recognition if the image supplied is blurry, has low contrast or noise. For this reason, none of the methods so far can authenticate a person with 100% accuracy, therefore having multi-factor identification with biometrics would prove a more secure solution.

There are multiple methods of biometric authentication. One of the most common is 1:1 verification, and is used when security takes priority over usability. This method compares biometric input from the user to a specific pre-recorded sample stored on the database. An example of this would be unlocking a safe with a fingerprint lock. First, the sensor on the safe records its owner’s fingerprint signature, then every time someone tries opening the safe it compares the input with the pre-stored example; if a match is found – voila, the safe opens! Moreover, to increase identity protection and reduce fraudulent use of fake IDs, places such as Portugal, South Africa and Hong Kong use smart identity cards. They have a microprocessor built into them that allows fingerprints to be matched to stored data by using the “Match-on-Card” algorithm.

Another common method of authentication is 1:N identification. This method compares user input to all recorded samples on the database, rather than picking out a specific sample to match the input to. The larger the size of the database the more samples the system has to check, making this the slower method when compared to 1:1 verification. An example of this would be police database records. Fingerprint samples found on a crime scene can be run through the database to check if the criminals involved had any previous convictions.

The last type of authentication is N:N identification. This method is based on similarity search between two or more samples in the database. It does not require an additional input from the user and is mostly used to detect duplicates. This process can be rather lengthy but extremely useful in cases such as, say, identifying eligible voters within the electoral register. Once the duplicates are found, they are removed from the system leaving the user with unique data samples.

Biometric technologies can be applied in a wide variety of sectors such as government affairs, healthcare and enterprise. Fingerprints, previously mostly relegated for use in areas such as police records, are now on every electronic device granting access to their owners as well as allowing workplaces to track their employee attendance, helping identify amnesia patients and conducting background checks. They are still being used in law enforcement, especially forensic analysis, together with palmprints to better identify criminals and manage penal institutions’ data systems to avoid duplication. Facial recognition can be used to unlock electronic devices or implement smart advertising too, but its ultimate goal is to provide more security to the public. It is being used to prevent retail crime while authenticating criminals from CCTV footage, finding missing people, identifying diseases that alter patients’ appearance and aid forensic investigations. Passing through airport security can sometimes be a long and tiring process which nowadays can be improved with biometrics. Iris recognition is already being used in several airports as immigration control around the world, facilitating the travelling process. Lastly, voice recognition technology is here to provide hands-free mobile authentication, used with virtual assistants as well as identity confirmation during customer-support calls. All of the identification methods mentioned above and their combinations are successfully used in the financial sector to accurately authenticate customers and prevent financial crimes.

Luckily, there are companies offering such technology to guarantee public security, and MegaMatcher ABIS is one of them. It is an automated high-performance biometric identification solution designed with all necessary components for government and enterprise applications at large scale. It accepts fingerprint, palm print, iris and face images for creating biometric samples which can then be searched against the database. The system is designed to quickly and accurately handle multiple biometric requests, therefore it does not lose quality when more than one physical feature is saved in its template. If it comes across dubious results, it forwards them to humans for manual verification. It comprises ready-to-use services as well as customizable applications suitable for specific project needs, works well with third party systems. Since this solution has been developed proprietary by Neurotechnology, it provides the user with better performance and accuracy. In fact, MegaMatcher ABIS has been developed using award-winning technologies. For the last couple of years the solution has been announced as the most accurate or the second most accurate technology accordingly in high speed fingerprint and palm print recognition or iris recognition. By offering accurate and reliable results in authentication processes, MegaMatcher ABIS is making the world a more secure place one user at a time.

As we continue on improving everything we touch, technology innovations are following. Now most of us are using our fingerprints only to unlock mobile devices but in a few years biometric technologies will provide us with opportunities we have only dreamed of. To use them instead of a credit card to pay for a meal or authenticate oneself at the airport – just to name a few. As we know, however, with great power comes great responsibility, therefore education on the inner workings of biometrics is a crucial step for a secure society.